Copper (99.11% copper, traces of misc. elements), 51.1mm
Although accounts I have read of this medal
do not record copper examples being struck
xray-fluorescence analysis of this example
shows it to be nearly pure copper.

Generic Award Medal?, obverse of Harkness NY-520, white metal, 44.8mm.
I suspect this may have been done by George H. using his father's die
since he was in the habit of producing such works and his father
was not.

Although very similar to the first reverse this reverse has some
differences - "SOCIETY" being abbreviated as "SOC:", a
different wreath, and the inscription within the wreath not the same.
The obverse die appears to be the same die as the obverse as Baker 373
but missing the small symbol beneath the bust; the reverse of
this medal was the work of George H. Lovett. A note in Baker
indicates this die appears to be the work of C.C. Wright. Although the
quote from The Cultivator above attributes the medal to Robert Sr. can
we assume both are his products?

Embossed monochrome cameo, 10 1/4" by 6 1/4"
To see information on this painting go to: http://www.mfa.org/collections/object/the-passage-of-the-delaware-31231. 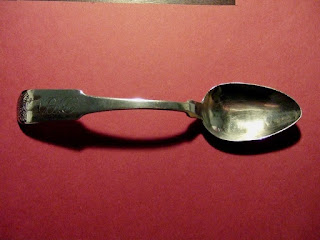 This appears to be a wax impression of a seal that had been engraved by
Robert Lovett Sr.  There is a similar item in the collection of the New York
Historical Society (https://www.nyhistory.org/exhibit/seal-impression-box-15).
Was the original seal kept in this box at one time and now just this wax
impression or was this impression made by Robert Sr. and sent to the
recipient for their approval? The motto "Pacis Nuncia" and the dove with olive branch
atop the shield is associated with the Murray family of Stanhope, Scotland. 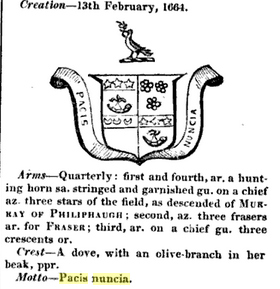 (from "A General and Heraldic Dictionary of the Peerage and Baronetage
of The British Empire", by John Burke, Esq., 1832)

As I was examining the paper label in the lid of the box I noticed what
seemed to be another label below it. It seems the original label had his
address as 183 Broadway; the one added on top of this was 5 Dey Street.
Probably the boxes he had remaining in stock after his move.